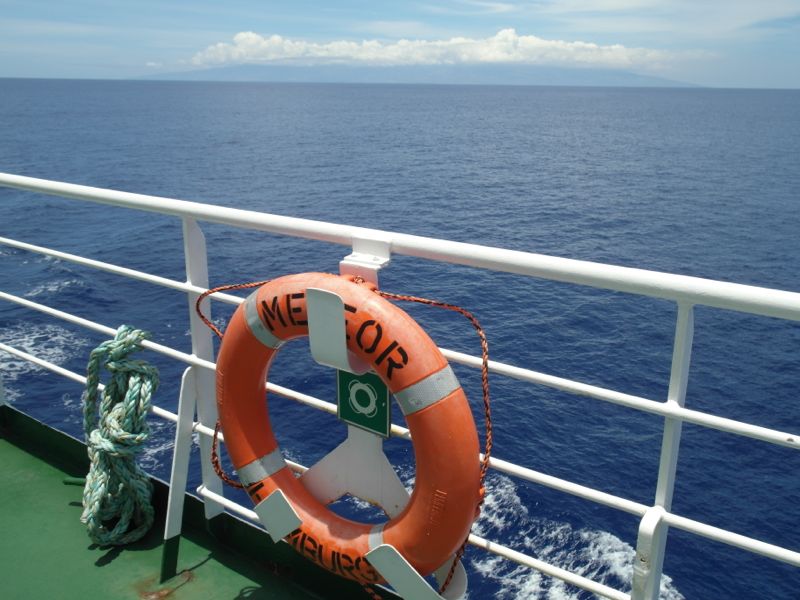 Cruise and deployment map. The rainbow-colored background shows the structure and depth of the seafloor (in meters). Black lines mark the route we have taken during Leg 1, collecting 28 German ocean-bottom seismometers (red circles). During Leg 2, marked by red lines, we will collect both French and German instruments (blue and red symbols, respectively). We will also map the seafloor along our way, as during Leg 1, and deploy two “MERMAIDS”, which are prototypes of seismological Argo floats from the University of Nice. From the southernmost point of Leg 2 (station RR36) onward, we will be following the Southwest Indian, and later the Central Indian, spreading ridges. These are huge underwater mountain chains whose relatively shallow depths correspond to yellowish-orange colors on the map.

The second half of the cruise has started – we are on our way south. During a stopover of two days in Le Port de la Réunion, 11 scientist colleagues left and 9 new ones boarded the “Meteor”, including the French OBS team. Leg 2 will be an alternating collection of French and German OBS along a 6,000-km long track that circles around far south of La Réunion and follows two mid-oceanic ridges for much of the way (red line on the map).

Looking back on La Réunion a few hours after departure, the island with its up to 3000 meter high volcanoes is seen to act as a cloud catcher, while an intense tropical sun is shining on the surrounding ocean, including us.