During the first day spent entirely on the sea, we set up the lab, tested the release mechanisms for the ocean-bottom seismometers, and successfully deployed the first seismometer. 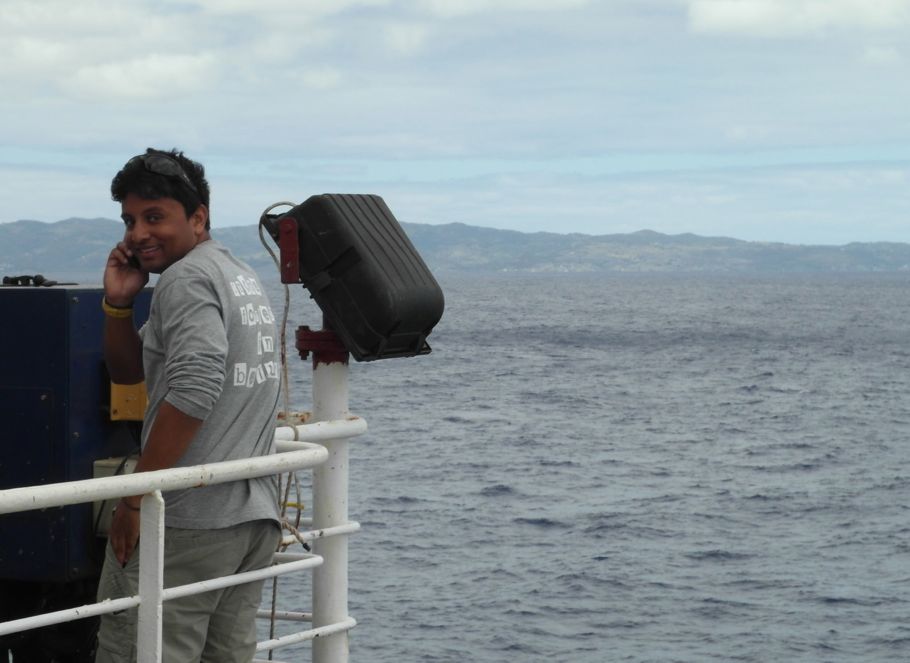 It seems like an endless and beautiful ocean is surrounding us. The last island on our journey (Rodrigues) rolled by hours ago, the last ship this morning. After the release of the first seismometer and a small celebration given by IPEV to honor this moment, we are getting into a daily routine.
Some of the scientists are working on recording and controlling bathymetry, gravity and magnetic data, while a smaller part are preparing seismometers for deployment. 24 hours a day, there is continuous activity. The OBS deployment teams do not care about meals or bedtimes, they have to be ready at all times. Even though we miss out on sleep and only rarely find the time to sit together and have a chat, we are definitely much happier with these circumstances than we were during the strike.

To drop or not to drop? 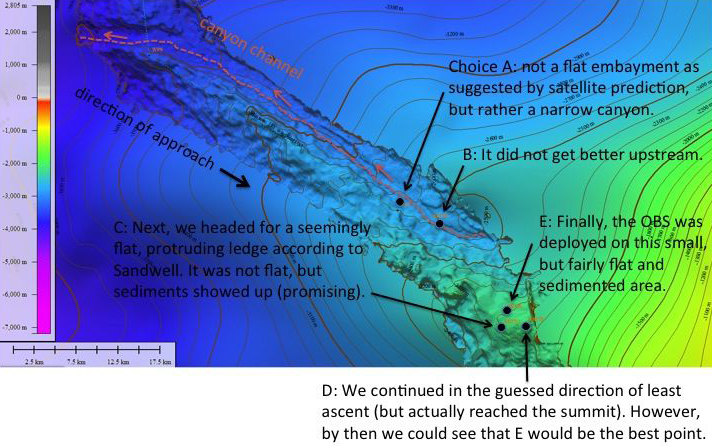 Among our most crucial decisions is where on the seafloor to drop our seismometers. Geometrically, the task is not unlike dropping them from an airplane at 3-6 km altitude, hoping that they will land in a suitable spot. Some luck is needed, because the seafloor is not mapped down to the meter scale, and because ocean currents can carry the OBS away laterally by several hundreds of meters before they reach the seafloor.

However, careful preparation can maximize the chances of a successful landing. The most basic requirement: the instrument should be recoverable when called to return to the surface – that may not be possible if it landed in a crevasse or tumbled over on a steep slope. Hence we seek out relatively flat spots of at least 1 km2 area. Such places can be found even in (underwater) mountain ranges, but dropping an OBS there requires more preparation than on a vast abyssal plain.

The other morning we had a challenging case, a targeted OBS site on the steep flank of the Mascarene plateau. The only prior bathymetry information came from "Sandwell", a jargon referring to maps extrapolated from measurements of gravity satellites – very smoothed and blurry sea-scapes compared to reality, but much better than nothing (see annotated map). "Sandwell" suggested a little flat embayment in the plateau flank, but as we approached, the highly-resolving ship bathymeter gradually revealed a steeply incised canyon, 2800 m beneath the surface. No sediments to flatten out even a small area. We collectively pondered the evolving scene, and imagined mud avalanches rushing down the canyon channel. Fact or fiction? No way to tell. It seemed unwise to drop the OBS there.

With not many options available, we targeted a small protruding ledge a few miles up-flank on Sandwell's map. The approach was steep and unpromising, but suddenly sediments started showing up on the screen of the sediment sounder. The saddle area turned out to be narrower and shifted compared to the Sandwell prediction, but 1.5 miles wide and reasonably flat seemed lucky under the circumstances. We dropped the OBS above the likely equivalent of an Alpine meadow, bounded by a steeply incised mountain stream, perhaps with bottom-dwelling fish instead of grazing cows. It had taken us two hours, but had also satisfied our curiosity. Expert bathymetrist Jérôme summed it up: "Interesting – so that's what a canyon may look like for Sandwell."

Annotated map describing an OBS deployment (station RR17). Before our arrival, we had only the blurry bathymetric information that fills most of the picture (“Sandwell”, extrapolated from gravity satellite measurements). In real time, we replaced a ~10 km wide swath beneath our ship track with the ship’s own, more highly resolving measurements (top left to bottom right). It revealed that the seafloor in this area was not smooth at all – it took some cruising to find even a small flat spot.

A life after the Marion Dufresne?

Written by Maria Tsekhmistrenko on Sunday, 28 October 2012. Posted in Cruise 2012

The last day has broken. Only a few hours left before we have to leave the ship. For the first time in weeks we are going to feel firm ground under our feet. We are leaving the ship, which was like home for us, though for a relatively short time.

Over the past days, I wistfully I enjoyed my coffee on my favorite outlook spot on the deck. I never got bored of the beautiful view of the ocean, and every day I enjoyed it more. While sitting here, I remembered many moments on this ship:

Jeans “plat au fromage”; Patrik, our best friend behind the bar; Chris trying hard to find some people to play baby foot with him after each meal; Henning’s long way down to get his “big, black, bad” – coffee; Karin and Gulihem trying to find the perfect deployment point for the OBS; Sacha’s tireless night shifts, which helped to sit out the long hours; Heiner playing Guitar; Oliver’s daily search for the next seminar speaker; the united march of the officers to the dinner table; the deployments, the Marion Dufresne, the ocean…

Thanks to all of you taking part in the cruise (LEG 1 and 2). Thanks for the unbelievably great, exciting, educational, fascinating and definitely unforgettable time on this ship.

The first four days on sea have passed very quickly. We had to get operational without delay: the first recovery of an ocean-bottom seismometer (OBS) happened only six hours after leaving Port Louis. Since then we have recovered eight instruments, and have experienced various weather conditions and technical quirks. Calling an instrument back after 13 months on the seafloor is the hour of truth: was everything done right and did the technology work?

Recovery is straightforward in principle. The ship navigates to the spot where the OBS was deployed last year. We send a short sequence of acoustic pings into the water using the ship's hydrophone. The instrument recognizes its "name" (unique code of pings) and turns a little hook to detach itself and its buoy from the iron anchor that has kept the whole assemblage down. It takes 30-60 minutes to rise to the surface where it is easily noticeable by its flasher, its radio beacon, and its bright orange colour. Only that in practice, things needn't be easy on the open ocean. The acoustic link down to 3000-5000 m is variable, the salt water is corrosive and may have damaged electrical connections or batteries, and high waves or poor visibility can make it difficult to spot the instrument and to hoist it onboard.

We were lucky that during the first few days the weather was sunny and the sea was calm -- good conditions for getting into working mode. For the next few days, a tropical storm will be our companion, travelling westward just as we are, just a few hundred kilometres to the north. Rain, higher waves, and a more physical recovery experience this morning gave us a first taste.

Recovery of our first ocean-bottom seismometer RR17 on a bright day and a calm sea.

Our latest recovery of an OBS as we entered the fringes of a tropical storm system.

First shower in a year

OBS technician Edith is kärcher-ing seismometer RR12 with freshwater just minutes after it has been pulled on board. The narrow titanium cylinder that sticks out between the orange buoys is the release unit, which attached the assemblage to, and later detached it from, its heavy steel anchor. The anchor stays behind on the seafloor. The wide titanium tube that rests on the wooden pallet is the seismometer itself. The data logger and lithium batteries are contained in two horizontal titanium tubes on the opposite side of the buoys (barely visible in the photo). The orange rope contains a few loops by which the sailors fish up the OBS with their long hooks once it has resurfaced.

Today in the earliest morning hours, we recovered the first French OBS (station RR28). The operation had been preceded by some additional technical preparations because this model needs to be approached by the ship even more carefully than its German counterpart, and it consists of two pieces that can start to swing as a double pendulum while being lifted out of the water. RR28 also didn’t reply to its release command (at least not audibly), leaving us to worry for three hours whether it would appear or not. When it finally did, its recovery went smoothly despite a relatively rough sea, and the seismometer has brought back very nice data.

All nine French OBS are back

Under a gorgeous tropical sun, no wind, calm sea, we recovered the last of nine French OBS from the INSU instrument pool. Relief was written on the faces of our two engineers Romuald Daniel and Xuan Li, who had worked hard to ensure the good functioning of the instruments and their safe return to the surface. So the hardware recovery was 100%, and we estimate that the overall data recovery rate (duration of useful functioning) for these 9 OBS will be around 80% -- a very good result for this kind of experiment, especially since several of the instruments had been deployed for the first time. Bravo and thanks very much to Romuald and Xuan.
We need to recover 4 more of the 48 German OBS, and we are awaiting them impatiently.

All seismometers are back!

On another gorgeous day, now 200 km southeast of Mauritius, we pulled ocean-bottom seismometer RR56 out of the water – our last instrument is back. Its ascent may have been accompanied by a whale. The big animal surfaced directly next to the ship immediately after we had pulled the OBS onboard, and dove back and forth beneath the ship’s hull twice before disappearing into the blue. A farewell from Neptune? The science party greeted back with excited shouts in any case.

57 OBS deployed, 57 recovered a year later: big relief among technicians and scientists because the marine environment is harsh, technology has its weaknesses, and losses would not have come as a surprise. Some luck is definitely needed, but when you achieve a recovery rate of 100%, you also know that you did something right. Thank you very much to our extremely professional OBS teams: Erik, Edith, Maria, Kasra and Juan for the German instruments, and Romuald and Xuan for the French OBS!

Wednesday, 4 December at 5:00 in the morning, La Réunion Island is lying ahead of us in the first daylight -- our cruise is ending here.

The "Marion Dufresne" arrived in Le Port together with us.

We made a fuel stop in Mauritius yesterday. During our overnight transit to La Réunion, the research vessel Marion Dufresne had stayed by our side the entire time. They too had been filling their tanks on Réunion’s enterprising sister island, but for us, the unexpected company of “Le Marion” during our last cruise night meant a bit more. It was with this French ship that we began our experiment and deployed our seismometers 14 months ago. Being accompanied home to Le Port by Le Marion, with all OBS recovered onboard the German Meteor, gave a beautiful sense of closure.

Thank you very much to the science party of cruise M101, and to those who will now work hard on the data, in order to illuminate one of the darker corners of the interior of our beautiful planet.

And thank you very much to the crew of the Meteor for their dedication, professionalism, and good humor at all times of day.

A GoPro video summarizing in 4 minutes the RHUM-RUM 2013 experiment!