Working the night shift, 2am – 4am 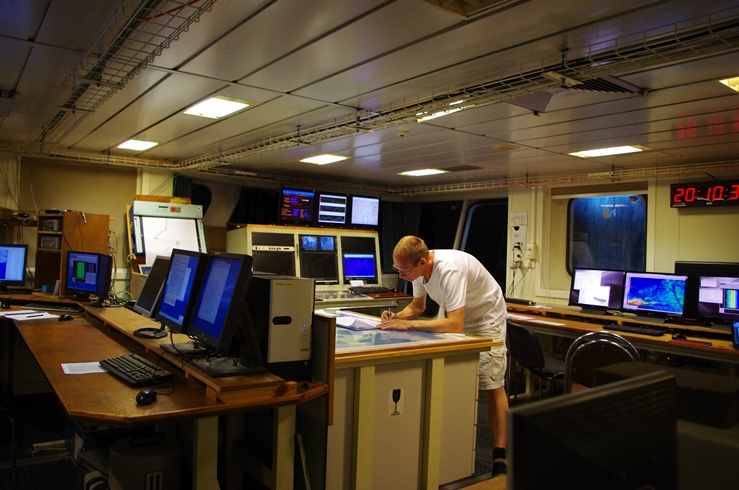 Man, this is a tough one. You don t know whether you sleep before the shift or you try to keep awake somehow ... with coffee, talking, going outside into the wind, playing badminton in the ship's belly.

Indian Ocean time 02:15:00. The scientific room is empty. We are taking the first reading of the data that we are acquiring. The scientist's shift work is dedicated to monitoring the proper working of the basic operations: the scan of the seafloor topography (bathymetry), the magnetometer that is towed on a long line behind the ship. The current values are written into the logbook every 15 minutes. That is done in 30 seconds. In the mean time one can read a book, talk, do guitar-fingering exercises or try a headstand without falling over. The next reading approaches fast.

Indian Ocean time 02:30:00. We are cruising at 15 knots. The seafloor is 4355 m below us. Two large screens show the seafloor in bright colors. The bathymetry is sensational. The Earth is having a party down there and unless we had these sophisticated instruments we would not notice. It would be like flying at night over the Alps or the Rhine graben. Below our ship there are ridges where oceanic crust is created and drifting apart. Hundreds of meters high. Linear features on all scales indicate the consequences of the seafloor dynamics with motions of several centimeters per year.

In our daily seminar at 5pm in the conference room we are learning and discussing the marriage between such oceanic ridges with plumes. Plumes are (or are they not?) deep Earth features that appear to be static while the oceanic plates and the ridges move over them. Sometimes plumes and ridges attract each other, exchange some warmth ... and yes they do have a ball once they are together, spewing out loads of lava ending up as volcanic plateaus that may create big islands (such as the Azores, Iceland, and others). Sometimes the ridges have enough of the aging plumes, wander on looking for a 2nd spring. Sometimes they retire together.

Indian Ocean time 02:42:16. The phone rings. The bridge is calling. The captains' assistant starts speaking rapidly in French. "Attendez, je ne suis pas Français, lentement!" I am responding. He tells us that in eight minutes he will start slowing down the ship as we are approaching our next target location. We note that down in the log book and the technical assistant is turning on the sonar logging of the seafloor. We look at the screen and we see several flat connected horizontal lines zig-zagging away at the edges. The middle looks like a layer cake and that's just what we want. The sea floor is flat. Chances are good the seismometer will make itself comfortable in a flat position.

Now the place comes alive! The chief scientists and technicians appear to bring the baby safely off the back of the ship. When the final position is found the crane lifts the OBS off the ship. Very very slowly it is lowered down. Sometimes the waves are making problems and if the right moment isn't found the seismometers makes a rough landing on the water surface. The moment has come and it is off the hook. For a few moments one can follow the blinking white light receding into the abyss.

It would be so cool to accompany its way down to the seafloor with an onboard webcam. Have a glimpse of its location for the next year. Meet the shrimps that surround it. Well, that is something for the next generation. If all goes well in a year's time suddenly it is released off its steel case and floats up with exciting earthquake data coming from all over our planet.