The whale and the butterfly (digression about rounds on the water) 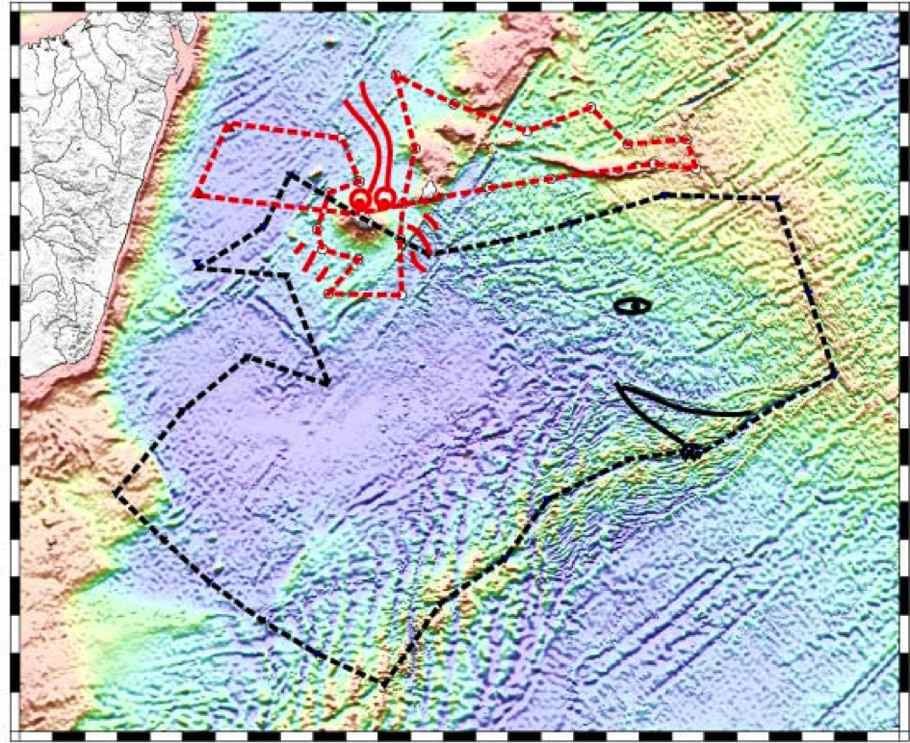 Of us, marine geophysicists, who wander on the oceans, looking for indices to better understand how the seafloor forms, ages, and disappears, some are saying that we are doing rounds on the water. It is untrue, indeed! A short glimpse to the route map of cruise Rhum-Rum - routes achieved during the first leg, routes to be done during the second one - clearly shows that, if we do accumulate some mileage, it is certainly not doing circles but much more complicated figures, which await patiently an improbable Sigmund Freud to decipher their deep meaning, their psychoanalytic signification. This aspect appeared to me when, just after my PhD thesis - otherwise said in the Middle Age - I boarded the first Marion Dufresne for cruise MD67. Possibly affected by our short stop in Kerguelen Island when approaching the study area, our path was drawing a giant penguin superimposed to the structures of the Kerguelen Plateau and the Enderby Basin. Years later, when I was leading cruise Magofond 3 on R/V Suroît south-east of the Canary Islands, I rapidly noticed that our tracks were making a big M then a smaller A - we did not reach the end of the word, but were then making deep-towed magnetic profiles across the Cretaceous Quiet Zone to try to unravel one of the greatest remaining enigmas of geomagnetism. And today, finishing Rhum-Rum Leg 1, the two wide loops that we made to the East - almost touching Rodrigues, and Mauritius twice - and to the West - in a rather shy approach to the Big Island of Madagascar - let me think of the (truncated - we lost 6 days!) wings of a giant butterfly (Figure 1), whose body would be made of the inner circle of ocean bottom seismometers that we consciously dropped all over around La Reunion Island... Should we imagine the caterpillar, moving up from the deep Earth mantle with ascending currents of the inferred plume, cocooning in the heat of the Fournaise then metamorphosing to butterfly and taking advantage of our cruise to escape, like an allegory of the Truth coming out of the well - I wouldn't dare to say in what apparel!

As I write Leg 2 remains to be done, and I will unfortunately not be there to contribute more than through some maps - again - left onboard to the best use of the chief scientists. I already see, in the projected tracks, the shape of a whale (Figure 1), its noose on the Rodrigues Triple Junction - this peculiar point where three mid-ocean ridges meet. The whale's front follows the Central Indian Ridge, its mouth would be located in that small area of the Southwest Indian Ridge where eight ocean bottom seismometers will be deployed very near to each other - may be to detect a possible raging "baleenache"... Paradoxically, I imagine the dorsal fin on the side without any active ridge ("dorsale" in French), in the Madagascar and southern Mascarene basins, as an indication of other, fossil spreading centers that we would not have properly detected yet.

Now you know why I entitled this essay "the whale and the butterfly". It is open to analysts and other psychiatrists, professional or not, to further investigate the matter - delirium is not unusual in geosciences!