HomeBlogCruise 2013Shark attack on the magnetometer

The way they were… 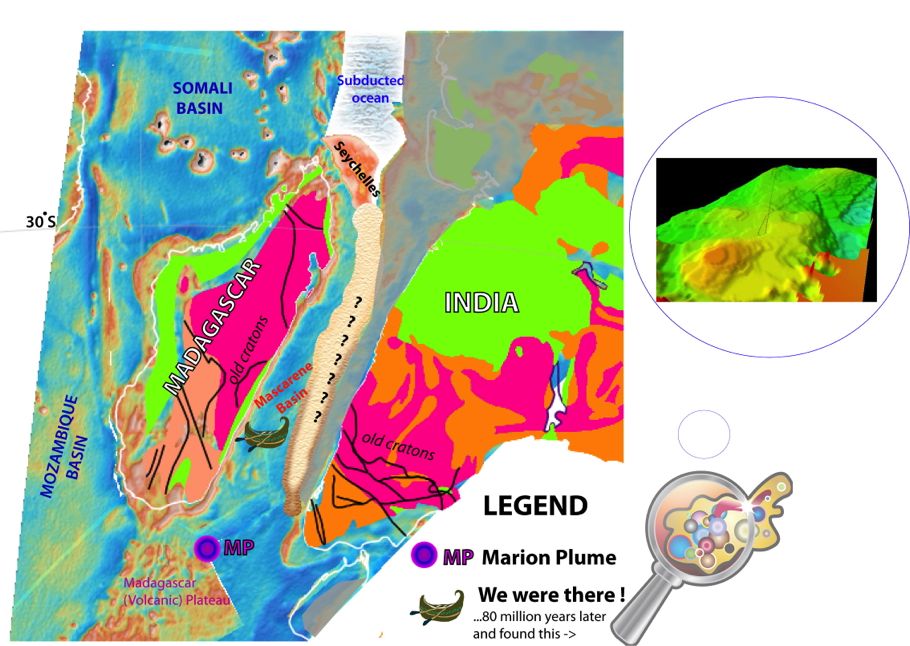 For the last two days we were collecting data and deploying OBS in the southern Mascarene Basin, following "highways" from the youngest part of this ocean (about 60 million years) to the oldest part (probably older than 80 million years). Yesterday we have reached one of the points closest to Madagascar, and therefore had a "glimpse" at the early history of this region.
This sent us back in time approximately 80 million years ago – so how was it like back then?

Well - first of all, Madagascar was much closer to the Indian subcontinent and the Mascarene basin was in his early days (I mean million years). At that time they were both travelling northward from southern latitudes (northern Madagascar was situated at about 30 degrees south), having left Antarctica in the Mid Cretaceous time. Older oceans in the vicinity (the Somali and Mozambique basins) already reached maturity by the time new oceanic crust started to form between India and Madagascar. Shortly before that happened, bursts of volcanic activity affected Madagascar's margins and probably formed a huge volcanic plateau south of it - the Madagascar plateau. This was because at that time, another plume, older than Reunion – the Marion plume, was in the vicinity of the southern Madagascar (and the incipient Mascarene oceanic basin) and created magmatic pulses now and then. Whether this also reached the young Mascarene basin – is difficult to say –but we do see some unexplained higher plateaus close to the SE Madagascar margin, and believe that a tiny portion of it was imaged by the multibeam system just yesterday.

The following map, despite its (too) bright colours is a real map that catches a moment in the Mascarene basin's childhood. Decades of geological and geophysical data collection, interpretation and modelling makes now possible to construct such a snap in time. One can observe the position of the main land masses and their older history (geology from Archean to Cretaceous), around them reconstructed oceanic seafloors (shown by the present day free air gravity-which can give an idea about the structure of the oceanic crust under the sediments), and even an ocean that doesn't exist anymore, consumed by subduction somewhere between India and Arabia. The location of the mighty Marion plume is also shown, as we can trace back its position through knowledge of plate tectonics and mantle dynamics.

This story will have more details in the months and years to come, once the data collected now will be processed and interpreted by the RUM-RHUM project participants. And it will help us understand the tumultuous life of the Indian Ocean at the time of significant tectonic and magmatic activity that may have contributed to global changes like sea level rise and changes in seawater geochemistry. Stay tuned!