HomeBlogCruise 2013"The Sun, the Sun, from the Meteor"

The eternally unfinished business of science 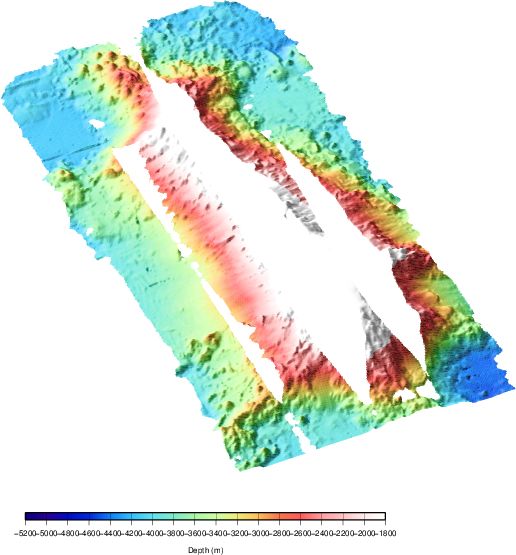 Tuesday, 3 December at 9:54: Marine geophysicst Dass Bissessur turns off the multi-swath bathymetry – end of data acquisition on cruise M101. Of course there would be more to do, but our time is up.

Shortly afterwards, we are cleaning the labs that have served us so well as work places over the past 40 days, while the Meteor is fueling just outside Port-Louis harbor, Mauritius. Now we only need to transit to La Réunion until tomorrow morning.

We were lucky that the weather had never been bad enough to prevent or delay OBS recoveries. When all 57 seismometers were back on Day 35, we found ourselves with a few unused days of ship time, which we decided to use on a bathymetric and magnetic survey northeast of Mauritius. The target was a smaller, east-west striking chain of underwater mountains that trends away from Mauritius into the “Rodrigues segment” of the Africa/Somali plate. As far as we could tell, it had never been mapped with a modern multi-swath bathymeter. We are interested because it may represent part of a suspected magmatic flow channel at 100-200 km depth, which may be transporting hot rock from the Réunion hotspot to the Central Indian spreading ridge. Thus the hotspot might be “spiriting away” its heat largely undetected (a state of things that we would want to end).

It was an exploratory survey. Three days are not much, so we had to design with a rough brush, trying to guess from the coarse satellite maps where the top of the ridge might be running, and where to attempt a couple of passes over the flanks. Coverage gaps were inevitable. The above plot shows the result, a 3-D rendering of the mountain chain. It was found to have an elongated flat top, which means it probably emerged above sea level sometime in the past, but now it lies 350 m below sea level (the bathymeter beam shrivels together to not much more than a line at such shallow depths, hence the big "hole" at the centre of the image).

There is bound to be an interesting tectonic/volcanic story, but it’s clearly an unfinished project, like almost all endeavors in science. We’ll scratch our heads, try to come up with reasonable hypotheses, and hope that someone can return for a second look not too long from now.