HomeBlogCruise 2013Holes in the crust

Holes in the crust 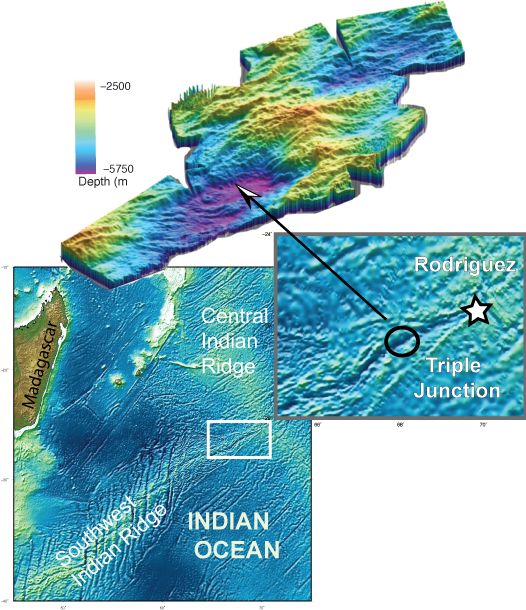 Seafloor depths at three different scales of zoom. Arrow points at a deep depression of -5500 m, even though the area is nominally located on an underwater mountain chain, the Southwest Indian spreading ridge (3-D renderings by C. Gaina using newly acquired bathymetry data).

We’ve been cruising along the Southwest Indian Mid-Ocean Ridge for a couple of days now, and we get to see more and more its effort to break through old oceanic plates. The ridge is bending and splitting, trying hard to establish itself between the older neighbours. And then we see the “Holes”! It is like the Grand Canyon of mid-ocean ridges, but this abyss bottoms out more than 5000 meters below sea level. Cliffs rise up more than 2500 meters to either of its sides. They expose rocks that are only about a million years old, instead of billions of years on land -- just a blink in geological time. Here the Earth’s crust is ripped apart until its flesh is laid bare -- the mantle.

At mid-ocean ridges, new crust is being added every year, and this is how tectonic plates are growing and moving away from each other. However, in rare places such as this one, only a small amount of magmatic material is added to the new plate boundary, not enough to fill the gap left by the divergence of the two ridge flanks. Oceanic crust is stretched until the mantle underneath rises to the surface. The Southwest Indian Ridge and the Arctic Gakkel Ridge (the so-called ultra-slow spreading ridges) are the only places on Earth where these extreme processes produce deep “holes” where one can peer through the oceanic crust into the mantle, and find out its deep secrets.