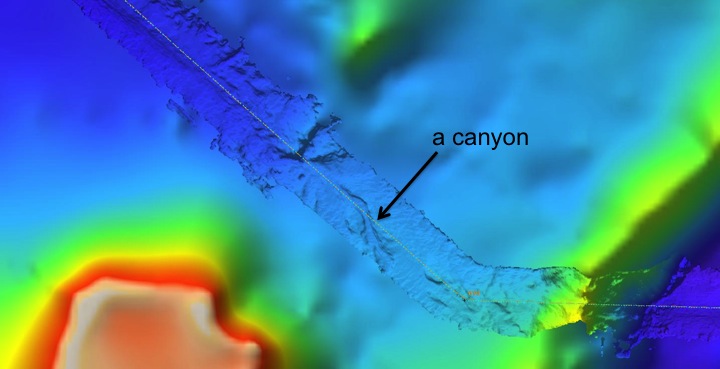 One of the more interesting aspects of a research cruise is the 'floating seminar' atmosphere. I don't mean the daily afternoon presentations in the conference room by one of the cruise participants, as interesting as they are, I mean the daily interactions of persons with various specialties from various institutions all focused on a single research project. Seeing how the ocean bottom seismometers (OBSs) are assembled, tested, deployed over the side (gently!); having discussions of what can go wrong, tales of past mistakes, improvements being made all give one a better understanding of how a seismic experiment is planned and executed far beyond what one can get from reading journal articles of OBS results.

Another center of activity and discussion is the monitor screen that displays each 'sweep' of the incoming bathymetric data. The 'multibeam' bathymetry of the Marion Dufresne has acoustic sensors that look not only straight down to the seafloor but also are aimed outward to receive echos from many angles away from straight down. Then the return echos of the many sensors are put together in the system's computer, and a 'swath' of bathymetry is produced. The moving ship results in a ≈5-km-wide ribbon of seafloor depths mapped, analogous to laying out a series of aerial photographs for land mapping.

The general locations of each OBS site were selected when the experiment was planned, but the precise location for a 'drop' is made while looking at the bathymetry collected at the site. At this time, many eyes gather in the lab around the bathymetric screen -- all looking for that perfect flat, not too rocky, not too steep spot on the ocean floor. Lots of murmur in the peanut gallery as Karin and Guilhem make the final choice -- sometimes the initial 'X' is abandoned and a 'better' place several kilometers away is selected instead.

The bathymetric screen showing the swath of bathymetry collected as we steam from drop-point to drop-point is a constant focus of interest. Many so-called "seafloor canyons" have been seen in the swaths. These features are tens of meters deep and hundreds of meters wide; they are commonly made by avalanches on the steep slopes of continental shelves which create a fast moving mixture of water and suspended sand which cuts away the flat mud on the seafloor much like a river cuts away land surface. Near continents, such 'canyons' can be traced for hundreds of kilometers; the source here mid-ocean would most likely be collapse of the slopes around the carbonate banks and islands of the Mascarene Plateau. Our cruise isn't mapping them -- following them from beginning to end -- but we have crossed and noted perhaps a half-dozen on our zig-zag path from site to site and wonder collectively where and how each may have originated.

And last night the sky was brilliant; a bright Milky Way and the bow of the ship pointing directly toward the Southern Cross.